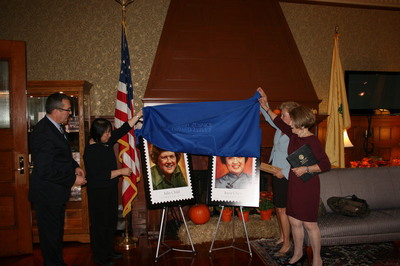 Cantabrigians* Joyce Chen and Julia Child's Celebrity Chef Forever stamps were celebrated today during a reception held in the stately chamber outside the office of David Maher, the mayor of Cambridge MA. These stamps had been released by the Postal Service in a celebration held in Chicago on September 26, 2014.

Mayor Maher said, "We celebrate everything that (Joyce Chen and Julia Child) did in their lives, and all that is Cambridge." Cambridge postmaster Katherine Lydon joined the gathering, and spoke fondly of her husband's memories of Joyce Chen's Cambridge restaurants.

The reception was attended by Stephen Chen, president of Joyce Chen Foods, and devotees of Julia Child from the Les Dames d'Escoffier International. Also in attendance were Robin Lapidus, executive director of the Central Square Business Association, several Cambridge politicians, and Jamme Chantler, owner of the Cambridge restaurant, Theolonius Monkfish. Chantler provided an assortment of refreshments, including dumplings.

Stephen Chen spoke of his mother's decision to move to Cambridge, a place that he called welcoming an open minded. He said that his mother had friends and relatives who went to Harvard and MIT. They said, "If you come to America, you have to live in Cambridge Massachusetts." Stephen said that it was the right decision.

*Cantabrigians are residents of Cambridge MA and Cambridge UK. The word is derived from Cantebrigge, an early name of Cambridge in the UK.