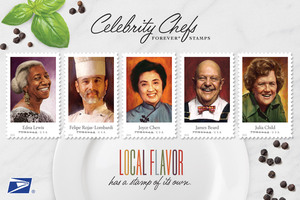 In a grand celebration at the Park Grill in Chicago, the USPS is celebrating its release 20 million limited edition Celebrity Chef Series Forever stamps, which honor James Beard, Julia Child, Joyce Chen, Edna Lewis and Edward (Felipe) Rojas-Lombardi. According to the USPS press release, these chefs “…revolutionized the nation's understanding of food. By integrating international ingredients and recipes with American cooking techniques and influence, these chefs introduced new foods and flavors to the American culture.”

U.S. Postal Service Entry Mail and Payment Technology Vice President Pritha Mehra said, "These chefs invited us to feast on regional and international flavors and were early — and ardent — champions of trends that many foodies now take for granted.”

First-day-of-issue postmarked stamps by mail may be purchased stamps at a local Post Offices, at usps.com/stamps, or 800-STAMP-24. Specialty items, such as framed art, and keepsakes are available number and is offered in the quarterly USA Philatelic catalog, online at usps.com/stamps,or 800-782-6724

This is What the USPS Says About Joyce Chen
In their press release send out today (August 26, 2014), the USPS included an in depth summary of the contributions of Joyce Chen to the culinary and cultural aspects of life in America. The press release said the following:

“Joyce Chen (1917–1994) is one of America's most well-known promoters of Chinese food. From her landmark restaurant in the Boston area to her cookbooks and trailblazing PBS television show, Chen invited newcomers to sample unfamiliar dishes in ways that firmly established Chinese cuisine in the United States.

Chen was born in Beijing, China, where her father, a railroad administrator and city executive, employed an excellent family chef. After overseeing a successful banquet when she was 18, Chen became eager to learn more about cooking and food. After the Chinese Revolution in 1949, Chen left China and found herself in Cambridge, MA, where Chinese students from local universities would visit her family for meals — and to enjoy a rare taste of home.

In 1958, Chen opened her first restaurant in Cambridge, MA. At a time when even soy sauce was considered exotic in America, Chen introduced many Northeasterners to such dishes as Peking duck, moo shu pork and hot-and-sour soup, often serving Chinese food buffet-style, at first alongside familiar Western dishes so nervous patrons could comfortably sample new things.

In 1962, two years after teaching Chinese cooking classes with long waiting lists, Chen compiled her recipes and kitchen tips into the "Joyce Chen Cook Book." She devoted chapters to proper chopstick usage, regional variations, the importance of tea, the difference between home and restaurant cooking and methods of preparing perfect rice. In the decade following, Chen's cookbook sold more than 70,000 copies and was reprinted well into the 1980s.”