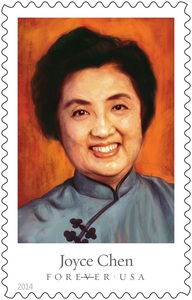 I am pleased to share with you that on September 26, 2014, the United States Postal Service (USPS) will issue limited edition Celebrity Chefs Forever stamps. I am thrilled that my mother will be honored along with four other ground breaking chefs: Julia Child, James Beard, Edna Lewis, and Felipe Rojas-Lombardi. According to the USPS, "... the Post Service honors and recognizes milestones, legends and people that have an impact on American Culture. These five chefs truly reflect "The Best of America."

My mother Joyce Chen was chosen for her pivotal role in the popularization of Chinese food in America. In their press release, the USPS said Joyce Chen was chosen, "For her landmark restaurant in the Boston area to her cookbooks and trailblazing PBS television show, Chen invited new customers to sample unfamiliar dishes in ways that firmly established Chinese cuisine in the United States."

In honor of the release of the Celebrity Chef Stamps, the USPS will hold a special event in Chicago on the release date: "From Kitchen to Envelope: The U.S. Postal Service Adds Flavor To Your Mail." I'm excited that I'll be attending this event in honor of my mother. The stamp launch will be hosted by Stephanie Izard, the James Beard award winner, and season 4 "Top Chef" winner, and Pritha Mehra, professional chef and Vice President, Mail Entry and Payment Technology for the USPS.

The Celebrity Chefs stamps, which appear to be oil paintings, are actually digital representations by artist Jason Seiler. I hope that you'll join me in honoring Joyce Chen by using these stamps. They will be available at your local post office.