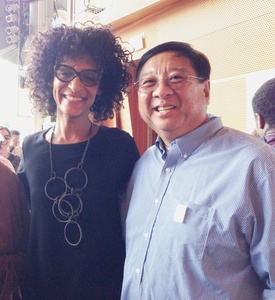 Along with the launch of the USPS Celebrity Stamp series, Stephen Chen, president of Joyce Chen Foods, was happy to attend the Chicago Gourmet, a "celebration of food and wine," at the Millenium Park from September 25 to 27, 2014. This show, put on by bon appetit show included many celebrity chefs, and exhibits.

According to Stephen, it was a great event with lots of wonderfull food. He met a number of celebrities, including Carla Hall, cohost of the popular ABC show, "The Chew." The Gourmet Chicago website's description of Carla notes that she combines her southern roots (Nashville TN) with her classic French training.