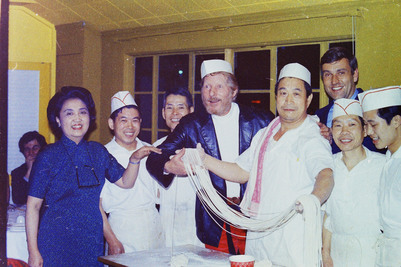 Joyce Chen developed warm friendships with many well known celebrities thanks to her outgoing personality and successful restaurants in Cambridge MA.

Taken in 1971 at the Joyce Chen Restaurant at 500 Memorial Drive, this photo captures the strong connection between Joyce Chen and Danny Kaye, and with Graham Kerr. An English cooking personality, Kerr was known for his television show, The Galloping Gourmet, and many cookbooks.

According to Stephen Chen, president of Joyce Chen Foods, Danny Kay was in town to conduct the Boston Pops. On Sunday, May 16, 1971, Kaye joined BSO Pops conductor Arthur Fiedler to conduct a program for the Boston Pops Pension Fund Benefit Concert. Earlier on July 13, 1961, Kaye had conducted a Pension Fund Concert at Tanglewood.

According to the BSO website, Kaye was coached to conduct by violinist Harry Ellis Dickson, the father of Kitty Dukakis. Kayes musicality, physicality and lifelong dream of conducting was fulfilled by leading the Boston Pops and a number of other orchestras.

About Kaye's conducting, Richard Dryer of the BSO wrote:

"Of course the audio recording from Tanglewood lacks the important visual dimension of Kaye's performance; Kaye's entire body, and not just his face, was as flexible as rubber. Therefore this download has been lightly edited to remove laughter at sight gags and other unseen antics. It focuses instead on Kaye's verbal virtuosity (he gives us the Chinese for chutzpah) and on his superb musical instincts - he had a wonderful ear as well as an agile tongue, and he knew how to apply his sense of comic timing to the parallel demands of musical time. The listener will soon recognize that the giants of the podium who admired Kaye's conducting were not just being polite. There was a video of Kaye conducting another orchestra in a similar program, but it has long been out of print and was never commercially transferred to DVD, so this recording is an even more valuable souvenir of a great musician who couldn't read music."