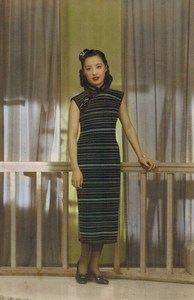 Joyce Chen sang in the lead in the Chinese opera, White Snake, in Beijing, according to her son, Stephen Chen. She was 18 or 19.

Prior to the cultural revolution of 1939, the Beijing opera was a center of productions that featured four elements: martial art, dancing, dialogue and voice. According to the website, Travelchinaguide, “Singing (was) utilized to intensify the appeal of the art by all kinds of tones. Dialogue (was) the complement of singing which is full of musical and rhythm sensation. Dancing (referred) to the body movements requiring high performing skills. Martial art (was) the combination and transformation of traditional Chinese combat exercises with dances.” (http://www.travelchinaguide.com/intro/arts/beijing_opera/)

The White Snake is based on a Chinese legend dating back to the Tang Dynasty (618 AD), in which a snake turns into a woman and marries. The interpretation of this magical story has changed over time. In some cases the white snake character is good and in other cases evil.