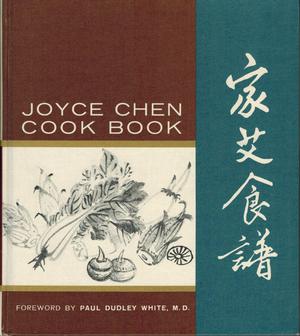 Joyce Chen's devotion to Chinese food extended beyond recipes and ingredients. In her breakthrough 1962 book, "Joyce Chen Cooks," Chen devoted a chapter to utensils for Chinese cooking. She identified three important utensils: "... a large sharp knife, a good hardwood cutting board, and a heavy smooth skillet." She also discussed the use of a large steamer, and described how one can be made with a coffee can.

Chen described the Chinese frying pan, "... called Wock by the Cantonese (which) is easier for stirring, but not suitable for an electric stove." Once Chen patented the flat bottom wok with a handle and introduced it to the U.S. market in 1971, the wok could be used on electric stoves. Next to this statement there are drawings of the "Wock," a Wock Cover, and ring to fit Wock for western (gas) stoves.

Also recommended by Chen were: large enamled pots for simmering, warming, and serving food; a small and large colander; wooden spoons and spatulas; mixing bowls; chopsticks; and tweezers for, "... removing feathers from birds or hair from pork skins." The chapter featured drawings of the Chinese Cleaver, Chinese Spatula, and Chinese Scoop.

Chen said, "My philosophy: We should control the surroundings, not let the surroundings control us. Of course, fine utensils make cooking easier." She mentioned that she would visit the home of American friends with ingredients but not utensils. She would use whatever they had, but thought that it was more fun to use Chinese utensils.