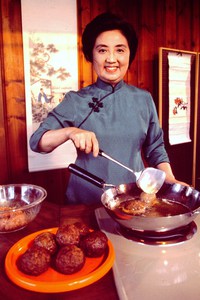 Thanks to the generosity of WGBH's Open Vault, we are pleased to bring you links to 11 episodes of Joyce Chen Cooks. Filmed in 1966 and 1967, this groundbreaking national show was the first to feature an Asian star. Along with her restaurants, cookbook, and classes, Joyce Chen Cooks was part of Joyce Chen's efforts to expand the reach of Chinese cuisine. WGBH, Boston's public television station, produced this show using the set of Julia Child's, The French Chef, in spite of the stars significant difference in height.

"The programs (Joyce Chen Cooks), says food historian Barbara Haber of Winchester, Mass., were as "eye-opening" as Chen's restaurants had been."*