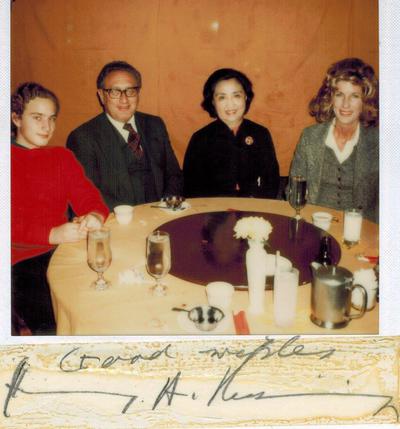 Henry Kissinger was a regular at Joyce Chen's Cambridge restaurant while he earned his AB, MA, and PhD degrees and later taught at Harvard during the 1950s. Decades later, as Secretary of State during the President Nixon's administration, Kissinger spearheaded the 1972 summit among Nixon, Mao Zedong, Communist Party of China Chairman, Zhou Enlai, Chinese foreign policy director.

Kissinger's connection to China and Chinese food led to his choice to eat at Joyce Chen's reastaurant in 1976, the night before his wife Nancy had surgery at Massachusett's General Hospital. The "New York Intelligencer" published an article about this meal on February 23, 1976, titled "The K's Seven-Course Pre-Op Celebration." In this article, Chen's focus on healthier food was evident. She is quoted in saying that she removes the fat between the skin and meat when making Peking duck.

The full article, which is not available online, is quoted below:

"A sumptuous seven-course Chinese banquet is not the kind of meal that most people have the night before major stomach surgery, but then Nancy and Henry Kissinger aren't most people. The Kissingers and his son, David, by his first marriage, had a rare dinner date in a public restaurant right before Nancy Kissinger when under the knife at Massachusetts General Hospital. The Kissingers chose Joyce Chen's restaruarnt in Cambridge, the best Chinese restaurant north of 72nd Street. "He used to come to my place when he was at Harvard," Madame Chen explained. The madame took over the ordering of the banquet, and arranged lacquered screens to create a semiprivate area and hung a yellow tablecloth over the outside window for security. (A dozen Secret Service men alos at at their own table next to the great man.) The Kissinger's feast included the special hot platter (lemon purse chicken, spring rolls spareribs, and pea pods); Peking duck served with mandarin pancakes and scallions, plus a sauce Madame Chen imports from China; coral and jade (a shrimp dish); beef with bamboo shoots and black mushrooms; almost-float dessert - and wonton soup, and apparent concession to young David.

Kissinger undiplomtaitcally pronounced the Peking duck better than the duck he had had in Peking ("We cut out the fat between the skin and the meat," Madame Chen says). And he asked the cook to come from the kitchen so he could thank him personally. After the Kissingers and their guards left to return to MGH, our reporter, who happened to be dining at a nearby table, inspected the fortune slips left when the fortune cookies had been crumbled. Nancy Kissinger's read: YOU WILL REACH SUCCESS IN YOUR ENDEAVORS. Henry Kissinger's read: MANY A GOOD MAN EXISTS UNDER A SHAPPY HAT. (Or was it the other way around?) In any case, the next day the surgeons pronounced the operation successful, and Kissinger went to a Boston Bruins game, hatless as usual."

UPDATE - Thursday, November 6, 2014
Forty-two years after Henry Kissinger visited Joyce Chen's restaurant in Cambridge, he was back in town at the age of 91. The Boston Globe reported that Kissinger was at Harvard University, where he discussed his new book, "World Disorder." According to Nicholas Burns of the Globe, Kissinger's view is that, "... rebuilding that system is essential for a 21st century where the United States will remain the most influential country, but will need to share power with China, Russia, India, and others." At Harvard, Kissinger spoke of the challenges he faced when negotiating with China's Mao Tse-tung and Chou En Lai.